Recognized Name Throughout the World for Decades

Bellissimo Law Group PC has developed an expertise in complex citizenship, immigration and refugee appeals and inadmissibility cases for persons applying for temporary and permanent residence in Canada over several decades. Aside from successfully assisting many individuals and companies each year, many of our clients are other lawyers, consultants and fellow stakeholders. What our Clients Say

BLGPC’s multicultural team encompasses many specialties and our staff members are among the most highly trained and most experienced immigration lawyers, consultants and clerks in the country. The standards for practice at BLGPC are rigorous and only those persons with key core competencies and extensive knowledge in the industry form part of the team. Our Team.

We have earned successful results at every level of the citizenship, immigration and refugee process – from the application stage to the Supreme Court of Canada. Our Success Stories. Bellissimo Law Group PC serves clients throughout the world.  The firm is extremely active in complex cases as reflected in the firm’s success stories and client testimonials.  Bellissimo Law Group PC continues its work assisting Canadian citizens fighting citizenship revocation after being one of the firms responsible for striking down the law as unconstitutional Hassouna v. Canada (Citizenship and Immigration), 2017 FC 473.  Mr. Mario D. Bellissimo C.S., founder and principal lawyer in particular was lead advocate when Canada’s medical inadmissibility system was under review.  He represented the Canadian Bar Association before Parliament and was pivotal in the introduction of a fairer and expansive national Medical Public Policy still in effect and issued on June 1st, 2020.   Mr. Bellissimo argued to deliver a successful immigration program, there exists a pressing need to protect public health and the integrity of the Canadian health care system while striking a balance with the legitimate needs of migrants, in a manner consistent with Canadian Charter values and international human rights standards.  The implications of this work transcended many layers of our society.

Bellissimo Law Group PC founder and principal lawyer, Mario D. Bellissimo, has achieved the highest possible designation as a Certified Specialist in Citizenship and Immigration Law and Refugee Protection. He is a published author, he teaches immigration law to members of the public and immigration professionals alike, and he is a frequent commentator on television and radio.

Bellissimo Law Group PC works with Citizenship & Immigration Canada, Service Canada, the Canada Border Services Agency, Federal Court of Appeal, Federal Court of Canada, Department of Justice and the Immigration and Refugee Board not only on individual cases, but also at the highest levels through our volunteer efforts on behalf of many organizations. Refer to our Canadian Immigration Blog and Twitter for recent updates.

BLGPC only accepts a certain number of immigration cases to ensure we can deliver the highest service standards. Clients are ensured confidentiality, ongoing consultation, file storage, and meaningful participation in the direction and presentation of their immigration case. Initial Consultation & Legal Fees.

BLGPC is guided by the principle of access to justice and as such works with low-income, low bono and pro bono immigration cases. Mr. Bellissimo acts on a pro bono basis for Toronto’s Sick Kids Hospital and Pro Bono Law Ontario and as National Immigration Law and Policy Advisor for COSTI Immigration Resettlement Services. For its contributions, Bellissimo Law Group PC received the Canadian National Pro Bono Law Firm Award.

Bellissimo Law Group PC is at the forefront of legal publications and is responsible for eight national publications including Canadian Citizenship and Immigration Inadmissibility Law, the Immigration Law Reporter, and ImmQuest – all published by Carswell, Canada’s leading legal publisher. In 2019 Mr. Bellissimo released his most recent publication entitled Labour Market Impact Assessments, Compliance and Enforcement: A Practical Guide.  For a full listing please see Our Publications. 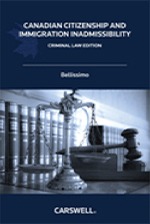 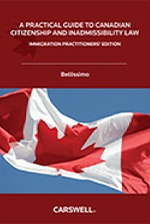 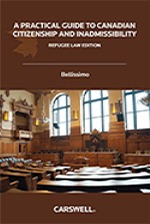 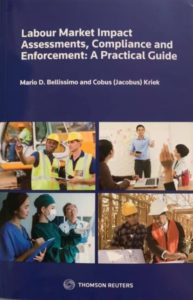 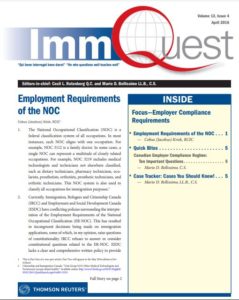 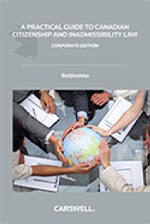 Bellissimo Law Group PC continues to be a leader in the media providing critical input on serious legal and policy developments in citizenship, immigration and refugee law as reflected in television and radio media appearances including print media as well as sought-out speakers throughout the country.

Bellissimo Law Group PC  is interactive and reaches out to fellow stakeholders and clients via our immigration e-newsletter, Twitter, Facebook, LinkedIn, and our multiple publications.